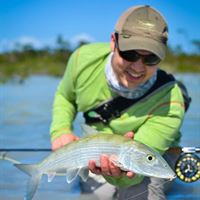 Tim is a passionate & supremely well-rounded angler based in Chicago, IL. His favorite pursuits are Atlantic & Caribbean saltwater species.

Tim Adkins was born in Virginia Beach, VA with saltwater in his blood! Living in several states throughout the East Coast and Midwest, Tim gained an ability to adapt to any fishery, finding and feeding fish from coldwater to warmwater to rolling surf.  Visiting family in New Jersey as a teen, he gained a love for striped bass, bluefish, weakfish, and flounder. While living in Ohio, he became obsessed with warmwater species and sight-fishing carp in streams and reservoir flats. He spent weekends figuring out Lake Erie's central shoreline and tributaries for smallmouth bass, steelhead, and drum. As an adult, he made it a point to explore the Florida coast from Jacksonville to the Keys and back up to Tampa.  Florida taught him to love snook, redfish, tarpon, and The Everglades. Since 2011, Tim has made an annual pilgrimage to Montauk, NY to sling line for speedy Fase Albacore by boat and fiesty Stripers in the surf. In Chicago, Tim fishes urban lakefront for pike, carp, smallmouth, drum, steelhead, and brown trout. He spends substantial time exploring the spring creeks of Wisconsin's Driftless region, as well as the many smallmouth bass, largemouth bass, musky, pike, and white bass fisheries in the greater area.

The exceptional breadth of Tim's fishing experience has made him a meticulous flytyer and gear junkie. Tim is on a constant quest to create flies that work well, ride right, and don't foul when you've only got one shot. He stays up to date on the rod, reel, and line options because he demands the best performance for each style of fishing. Ask Tim for his view before you purchase gear for a trip.

Tim honed his flyfishing instruction through multiple seasons of teaching weekly flyfishing and flytying class for Orvis. He's worked for for the Orvis store in downtown Chicago since 2013, enhancing fly selection and sales, exceeding fishing gear sales goals, and most importantly, helping anglers get started having fun in an otherwise intimidating world of flyfishing. He took his passion for sharing fishing knowledge to the next level by starting Motion Flyfishing, a flycasting and flytying instruction company that offers instructional hosted trips in great destinations.

Tim has a Master's degree in Sociology and has spent 7 years teaching at the university level. He is near completion of his PhD.

Check back later for some content here. Thank you!

Are you sure you want to delete?
DELETE

New users only. Existing users Login or Recover your password.